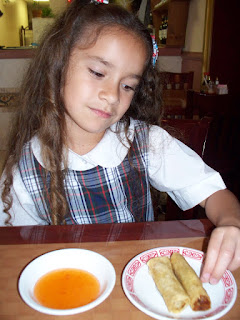 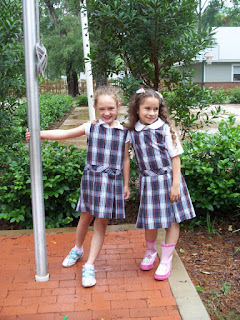 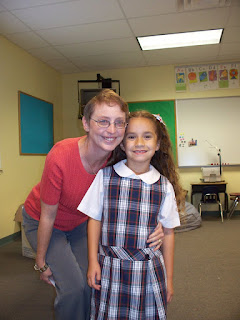 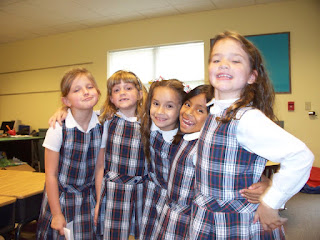 Ahhh, never under-estimate a typical wonderfully lazy Saturday. That is what can be nice about the rain sometimes---it forces you to slow down, take a nap, watch a movie, make brownies, play a card game of Go Fish with your child. David, on the other hand, is like a caged rabid animal on rainy days. He can't stand being confined to the indoors. He starts making comments like, "Check the weathe rnad see how long this is gonna last. I can't stay inside all day! Think of some place we can go just so we can get out." He says this with a slight panic in his voice.Custard and Miko love rainy days---they seek out a pile of laundry, curl up, and drift into a blissful sleep.....all day. Do dogs take Catnaps?
Well, yesterday was Saylor's last day of school. She is a 2nd grader now! She hugged some of her friends goodbye and can't saying with a big smile, "Well, Mom" ----she wouldn't say anything else except, "Well, Mom"---these two words translate into what is ahead for the summer, I can't believe the year is over, I can't believe I am a second grader---all summed up into, "Well, Mom" I asked her what she wanted to do and she said, "lets go eat Chinese food!" So that is how we celebrated her last day of school--at the Hong Kong Bistro. That and a little trip to go buy a Webkin which she loves. She had asked about 3 months ago if she could get a new webkin and I told her she could get one of the last day of school. She kept that bit of info at the forefront of her memory bank. Silly Girl. She chose and adorable hedgehog and she has been pampering it like a real baby.
Despite the fact that we are into our 6th day of rain from a Northeasterly rainstorm, Memorial weekend is off to a nice start. Saylor and her friend Sydney played until dark outdoors last night and have played ALLLLLL afternoon together. They looked adorable with their rainboots and umbrellas splashing in puddles and running up and down the sidewalks in the rain. Today, during a break in the clouds, the two of them put on their skates and had some rollerblade fun. They have identical skates which of course is, "soooo cool". When they aren't skating, they are zooming up and down the sidewalks on their scooters.David and I stayed up until almost 1 last night watching movies after Saylor feel asleep around 9. Soooo, Saylor, feeling quite refreshed and rested, woke us up at 6:45 this morning ready to start her day!David and I somehow found the energy to go outside during the break in clouds with thunder in the distance to go pull some weeds and trim some branches. But, it is raining again and expected to rain up until Thusday. Sooo talking inventory: Sodas-Check, Popcorn-check, movies-check.
Posted by My Name is Kirsten Not Kristen at Saturday, May 23, 2009 No comments: