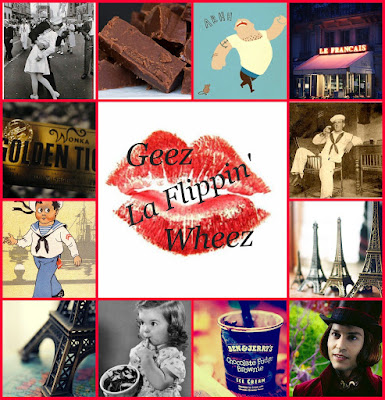 source
Anyone who has known me long enough and anyone who knows me now, knows that I do not cuss. I am not a cursor. I do not use profanity. Never have.....except for one time when I missed the attic stairs completely and without meaning to, took the fast way down from the attic straight to the hall floor. But, other than that, I never curse. I don't like the way I feel about myself when I say curse words. Plus, I am known for my positive nature and cursing just doesn't jive with a glass-half-full personality. In the late 80's (I was a runt in junior high), I heard my mom saying that she always felt like she owed it to herself to find an alternative word to a curse word when she was upset about something....for some reason, that always stuck with me. I don't even think she was talking directly to me, but, I remember her saying that.
Let it be known that I am surely not a saint, not even close. In fact, in my head, where no one else can hear, there is sometimes a whole slew of French terms that would make even a rude drunk sailor blush. However, by the time the french vulgarity travels from my mind to my lips, it transforms to, "Oh, Fudge!" In my mind I very often think one thing, yet, I have enough verbal Oh Fudges to make a chocolatier like Willie Wonka proud. I don't even like to say, Oh My God. So I say and type things like OMGosh. My husband also really appreciates this quality in me and I hope I am setting a strong example for my daughter.
Today, HOWEVER, was one of those days where I was tested on this firm belief of mine---the belief that I have been well-educated, graduated college, dean's list every semester to not be able to come up with some alternative word for my anger rather than a 4-letter explicative. Almost 2 weeks ago, some stranger got access to my debit card numbers and went on a shopping spree. Fraud protection contacted me and reimbursed everything, canceled my old debit card and issued me out a new one which was to arrive in 5 business days. We are now going on 9 business days and still no new card in the mail. AND, my totally awesome smart phone decided over the last couple of days that it wasn't gonna act so smart anymore and act more like a high school drop out. I am sure it has nothing to do with the little fact that I have over 400 pictures stored on the phone. I took it to the cell phone store and asked them to give it CPR or something and they said they would have to keep my phone alllllll day. Allll Day? What the fudge!?! So I was forced to spend the day in the stone ages with no cell phone and no debit card.....oh, and I had also forgot to put on my watch (I felt naked) which forced me to have to ask two strangers at two different points in the afternoon for the time. I needed to know when it was getting closer to the time when my daughter would be getting out of school so that I could go get her without being late.  I was amazed to see how very few places this day in age actually have a clock on the wall. This is a perfect example of how in my mind I am thinking one thing and saying something entirely different which comes out as, "This is Bull Corn!"  Needless to say, I arrived in the carpool line about 15 minutes sooner than I normally do and watched the minutes count down on the clock in my vehicle which seems to be the only clock in the universe on this day. I had a headache too. By the end of the afternoon, I had a twitch in my left eye and discovered that I had created a whole new word: Geez La-Flippin' Wheez. I normally only say Geez Louize when I am perturbed about something. But, that word just wasn't summing up my frustration about my phone and my debit card which was obviously being made by the world's slowest turtles on Neptune. However, Geez-La Flippin' Wheez seemed to suffice based on my situation. In my mind, what I was thinking, didn't sound anything like Geez La Flippin' Wheez.
I kinda like my new word. Oh, and as for my smart phone, it seemed nothing could be done to save it so they gave me a brand new one. Glad we bought the insurance on it. Yay me!
All in all, once I picked up my daughter from school and heard all about her sweet day, the other concerns of my day faded. I was feeling more and more like my upbeat--can handle a storm--calm through life's ups and downs--nothing rocks my boat-I am a sea captain's daughter--Kirsten. And by the time, my husband got home and we sat down together as a family and prayed before our meal, all felt right in the world again. We watched the minors in Chile get rescued on t.v. and it served as a reminder how small and mundane my day's worries were compared to the rest of the world. I figured Yonni Barrios (he is the miner who's wife and mistress discovered each other at the vigil while they waited for his rescue) was the one who was about to have a really really really bad day on top of the 69 horrible days he had trapped in the mine.
This day tried to test my character and I responded back with a Geez La-Flippin' Wheez which is a good thing.
Sealed with a Kiss, Kirsten
S.W.A.K.
Posted by My Name is Kirsten Not Kristen at Thursday, October 14, 2010 3 comments: